The set of two silver coins of the Czech Mint commemorates one of the most precious objects of the St. Vitus Treasure - the Coronation Cross.

When St. Wenceslas acquired the relic from the shoulder bone of St. Vitus in the 10th century, he probably had no idea that the history of one of the greatest temple treasures in Europe had begun. The Rotunda of St. Vitus became the home of the St. Vitus Treasure. Prince Wenceslas built it at Prague Castle, where the cathedral of the same name was later built. The diverse collection of breathtaking liturgical objects of incalculable value was expanded by the Přemyslids, Luxemburgs, Jagiellonians and Habsburgs. It included decorated reliquaries, monstrances, embroidered vestments, crown jewels and much more. In the 14th century, when the relics of saints were the most valuable treasures in Europe, the most precious part of the treasure was the golden cross. It was made by Charles IV as a container for the most precious relics of the Bohemian kingdom, which were connected with the life and suffering of Jesus Christ. For a pious man, the elaborately decorated reliquary represented a piece of heaven itself. It contained the nail and splinters from Christ's cross, the thorns from his crown, the rope with which he was scourged, and the sponge with which he was served vinegar. The cross also contained the remains of Jesus' loved ones - St. John the Baptist, who baptized him in the waters of the Jordan, and St. Anne, the mother of the Virgin Mary. The reliquary cross was regularly presented at the coronation ceremony of Czech kings, therefore, it came to be called the coronation cross…

The gilded coronation cross can be found on the reverse side of both silver coins in the set. In the relief of the first coin it is supplemented with a crowned portrait of Charles IV in profile. The additional motif of the second coin is the symbol of St. Vitus Cathedral in the form of the St. Vitus rooster, which is placed on the crest of the cathedral as a weathervane. The obverse side is common to both coins and bears decorative ornaments. Since the licence to issue commemorative coins of the Czech Mint is granted by the Pacific island of Niue, the obverse side bears its necessary attributes - the national emblem, the nominal value of 2 DOLLARS (NZD) and the year of issue 2022.

Thanks to selective gold plating, the Holy Cross provides silver coins with a realistic impression. 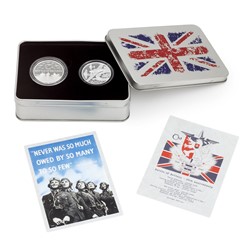